I'm not new to C++ or programming in general, but this is my first attempt at using Qt. When I create a new project it makes this mainwindow.cpp file:

Without touching that file and just making some changes in the ui file with the designer, then attempting to build the project for a preview, I get two "invalid use of incomplete type" issues for the lines ui(new Ui::MainWindow) and ui->setupUi(this);.

From what I understand, the problem is that it's trying to reference MainWindow before the class is instantiated. But Creator generated that code itself. Is that normal for a new Qt project? Did I skip a step somewhere? More importantly, what is the best way to fix that problem?

In addition to the great explanation by Kuba Ober:

I just want to add that the name of the class generated by the User Interface Compiler in the header ui_*.h (in your case it is ui_mainwindow.h) can be controlled from the designer by changing the objectName property of the main window: 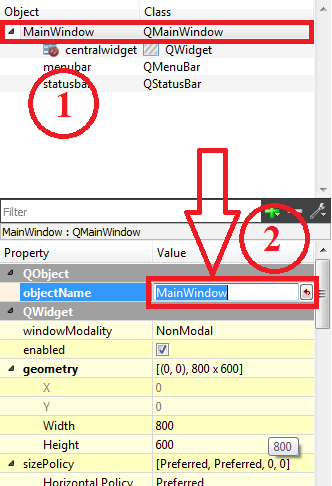 Most likely, You have changed that into something else. This will cause inconsistency between your code (written in the files mainwindow.h, mainwindow.cpp) and the auto-generated code from the UIC (in the file ui_mainwindow.h). Where the former continue to refer to the class as MainWindow while the latter had that name changed.

And since Ui::MainWindow is forward declared in mainwindow.h, it becomes an incomplete type (and hence the error you get). because its definition (generated in ui_mainwindow.h) is done to different name.

END_OF_DOCUMENT_TOKEN_TO_BE_REPLACED

Why does my ANTLR for Java grammar file not compile?

Why does my LINQ Expression with multiple parameters not compile?

Why does the standard allow functions that do not return compilation?

f() does not return even though it's signature say it should. Why is the reason for allowing this to compiling? Is there a reason the C standard does not require the compiler to make it fail? I know that it is Undefined behavior and all, but why is i

Imported Eclipse projects that do not compile

I installed Eclipse 4.2 in new windows 8, and copied and imported all my projects. All projects are based on phonegap so have the phonegap build None will compile and all have red X by the src> app.java although they work fine in the original eclipse

Why does this VBA If True Then statement not compile?

Does anyone know why eclipse generates the folders "values-sw600dp" and "values-sw720dp-land" by default in an Android app? Why does it need 720dp in landscape, but not otherwise? It seems like I would want a values folder for 320dp, 4

Why does Xcode 4.1 mean that my only iPad application can run on iPhone Simulator?

I have an iPad-only app (targeted device family is iPad, architecture is armv7), but Xcode offers both iPhone & iPad simulators to deploy to in the scheme/device dropdown. If I create a new iPad-only project from scratch, only iPad Simulator is avail

While doing some refactoring of our projects and solution files, i have separated some .sln files to contain less projects. Occasionally i need to reference some projects from outside the scope of the current .sln file. For example, my initial state

VS2008: Launch the executable for a project that is not the active project in a solution

In VS2008, Is it possible to launch the executable for a project that is not the active project in the solution? (i.e. its name is not in bold). Not debugging it - just launching it. As far as I can see, you just have to drop in to Windows Explorer a

In summary, I think my question is this: How can I force hxcpp to compile haxe code for Flash 8 ? Here's where I'm at. I'm new to haxe, and am trying to get a sample from here: http://tilestudio.sourceforge.net/flash/Demo.html to compile using hxcpp,

JavaMail - How to configure SMTP "RCPT TO:" that will not match "To:" header in DATA

I want to implement image sync in my ios app. for this what i have done is take a photo upload that photo to firebase get the firebase stored url and send it to an api server so that server stores that info to a database It works ok as long as the ap

Unable to run Findbugs caused by: This project contains Java source files that are not compiled

I am currently using the sonarqube server 5.6 with scanner 2.6.1 and I keep getting errors during analysis for a java project. It appears to complain about some java files not compiled in the binaries folder (there aren't any at all in the binaries f