Why doesn't the graph in Sourcetree display a new branch branching off from the master branch , when I create a new branch called "testing123" in terminal ? 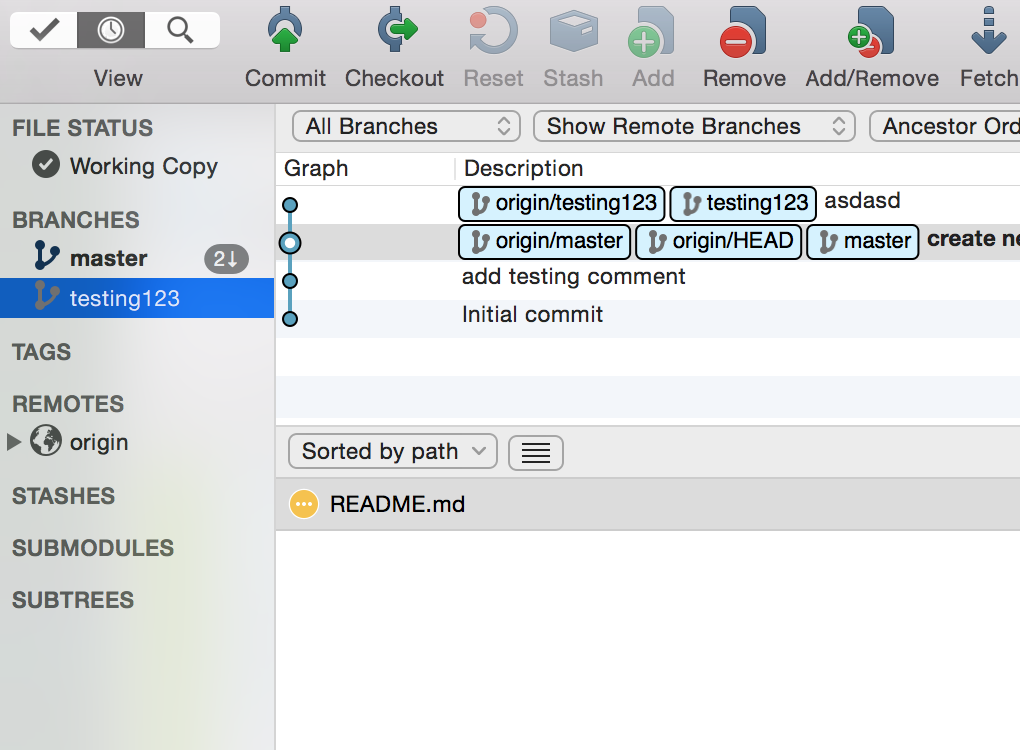 It does: it has one new commit done from master.

That means you have checked out the new branch testing123, done one commit and pushed it (hence origin/testing123).

You don't see any "branching" because there is no new commit on master since testing123 has been created: the history of testing123 remains "linear" with the one of master.

Once a new commit will have been created on master, you will see a fork.

See also this thread on SourceTree:

2 possible reasons for this:

END_OF_DOCUMENT_TOKEN_TO_BE_REPLACED

Why does not the event happen?

Why does not alert ("onEnded") work? All like doing on the manual. How to launch it in PlayerContainer? var PLAYER_ID = 'player'; var Player = React.createClass({ componentDidMount: function() { document.getElementById(PLAYER_ID).addEventListene

Why does not the CUDA synchronization point prevent the race condition?

Why does not the zero padding in my CSS create a "false" margin?

I've run into this in the past, but I've usually been able to design around the issue -- usually by setting the top-margin on the first P or H1 tag to zero manually (Didn't work this time ). Why am I getting a 'false' margin when I set my padding/mar

Im designing a multi cleint web server using multithreads in C using Pthreads, i have a Masterthread that is in a loop doing the listening, when there is a connection it spawns a new thread doing a function to serve, while the Masterthread continue l

Why does not the function provide new value in each loop?

New for swift: Why does not the timer update on UILabel?

I am trying to make a custom clock using swift. I originally wrote it in python but decided this would be a good opportunity to learn a new language but Im having a rough go at it. I have read a lot of great answers about using Timer(), but nothing s

Why does not the ScrollView display the TextView as a whole?

Why does not the JTable header appear in the image?

I was offering advice on capturing an image of tabular data on Java API or Tool to convert tabular data into PNG image file - when the OP requested a code sample. Turns out to be harder than I thought! The JTable header vanishes from the PNG that the

The code below records, plays, and "decodes" a wav file. When I graph the byte array from the file, it looks like this: The recording is of me saying "test", which should look like this: Does anyone know why the graph of the byte array

Why does not the ScreenTip appear?

Unfortunately I need to make changes to an old VB6 application. I have noticed that the image combo from mscomctl.ocx does not work correctly in Windows 7. No images are displayed, even though it is linked to an imagelist control, and worked fine in

Why does not the error message appear?

I am very new to PHP (only been doing it since September so I apologise if this seems like a silly question, I'm very stuck and can't work out the answer!) and cannot work out why my error message does not display when a user submits the form when it

Why does my recyclerview adapter not work? / Why does not the class work?

I have been trying to get the adapter for my RecyclerView to work, but I cannot get anything to display upon the cards, and also, the CycleTrails class does not run as the Logcat does not show any of the logs setup through the class... Before I setup

Why does not the Python function print a default?

I am new to Python and am attempting to print a default value set for a parameter. My code is as follows; # Functions def shoppingcart(item='computer', *price): print item for i in price: print i shoppingcart(100,200,300) When I run the code, all I g