I always find a picture is the best way to gain an intuition of an algorithm. The target function you suggest would give rise to a data set a bit like this: 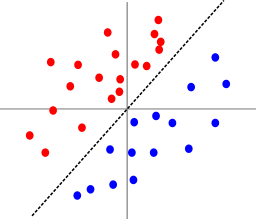 Where the function to separate the data is x1 - x2 = 0. The trouble is that normally, decision trees only have functions of one variable at the nodes, so the decision functions at the nodes are axis aligned. I image a decision tree learned on this data set would do something like this: 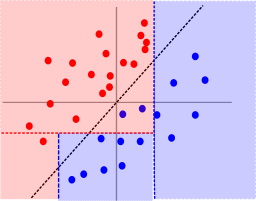 Hopefully you get the idea, obviously you can approximate the optimal decision boundary by doing this with enough nodes in a decision tree, but that means you run the risk of overfitting the data.

Actually, I said that decision trees normally use single variable functions at nodes, but there is another approach, described in a StackOverflow question about multivariate decision trees (that I failed to answer).

By the way, the best classifier for this kind of data would be a linear classifier, maybe logistic regression, which would find the optimal decision boundary

The effect of k in k-NN

The best description I can give for k in k-nearest neighbour is that high values of k smooth the decision boundary. It is also not the case that a higher k is always better then a lower one.

To think about k-NN we need a bit more of a complicated data set. For k=1, a k-NN model might make decisions a bit like this: 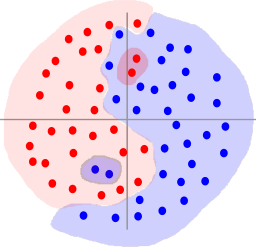 If we increased the value of k, the decisions would be affected by a larger neighbourhood of points and so the decision boundaries would become smoother. In particular, those little red and blue island would be overwhelmed by the surrounding data points: 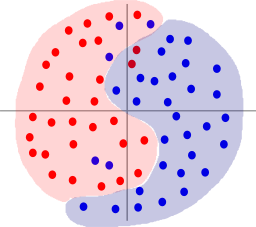 Whether using a high k is better depends on the level of noise on the dataset. Were those little islands really important and we learned too simple a model that doesn't fit the data very well, or were they just noise and did we avoid overfitting?

Unfortunately, given some large, complex, real-world data set you probably don't have a very good basis for deciding which algorithm is going to work best (unless you draw on previous work on the same or similar data). What most people do is carefully segment the data into training, parameter tuning and test sets and then run as many algorithms as they can think of. You might also find that you particular situation determines some properties that the algorithm must have (fast, incremental, probabilistic, etc.)

END_OF_DOCUMENT_TOKEN_TO_BE_REPLACED

Are there any data mining algorithms comparisons? Comparisons in terms of performance, accuracy and the required amount of data for generating the robust model. It seems that ensemble learning algorithms like bagging and boosting are considered to be

I have a dataset of students profiles (Age,sex,address...etc) with the performance note (1 the worst, 5 the best). I would like to know what could be the best data mining algorithm to determine the profile of those students with a performance bigger

Possible stupid question about the data $ this- & gt; CakePHP

I have an application the is loaded with forms in every view. I've become rather familiar with CakePHP's array syntax and I use the $this->data parameter a lot. I fell in love with skinny controllers and fat models, so I put as much code in my models

Question about basic data and the camera

So I am working on an app that uses core data to store attributes of objects that the user can set. I have primarily been focusing on the first part, which was setting everything up on the core data side, and now I am ready to move on to the next par

Questions about the Shunting-yard algorithm

I've implemented an expression parser in C++ following Shunting-yard algorithm, but have problems about the explanation on wikipedia. It's in 'The algorithm in detail' part: If the token is an operator, o1, then: while there is an operator token o2,

I am using an mvc application and in _Layout.cshtml page I have some javascript I wanna pass it a value of System.Configuration.ConfigurationManager.AppSettings["anID"].ToString() here <script type="text/javascript"> var _gaq = _

A quick question about the data returned by the call jquery.ajax () (EDITED)

EDIT: The original problem was due a stupid syntax mistake somewhere else, whicj I fixed. I have a new problem though, as described below I have the following jquery.ajax call: $.ajax({ type: 'GET', url: servicesUrl + "/" + ID + "/tasks&quo

basic question about adding data to the

The following string contains the serialize data of a form. I want to include session_id() in the same string, so how can I include something like session_id=session_id(); in it? Thanks. string = '&' + $('#new_form').serialize(); Inside your form tag

When I create a script with the Management Studio, it includes this part: WITH ( PAD_INDEX = OFF, STATISTICS_NORECOMPUTE = OFF, IGNORE_DUP_KEY = OFF, ALLOW_ROW_LOCKS = ON, ALLOW_PAGE_LOCKS = ON, FILLFACTOR = 70 ) What are those options and are they r

to create entity I use studys *temppatient = (studys *)[NSEntityDescription insertNewObjectForEntityForName:@"studys" inManagedObjectContext:managedObjectContext_NEW]; what if I waant to create object of the entity to use it as temp , what's the

Questions about the nextTuple method in storm flow processing

I am developing some data analysis algorithms on top of Storm and have some questions about the internal design of Storm. I want to simulate a sensor data yielding and processing in Storm, and therefore I use Spout to push sensor data into the succee

A few questions about 25 jquery tips

I was just reading this: http://www.tvidesign.co.uk/blog/improve-your-jquery-25-excellent-tips.aspx And had some questions about some of the advocated tricks: 9 - Give your selectors a context: What's the difference between using a context and using

I am new to data mining, so I apologize if this question may be an obvious question to anyone. I know there are quite a few data mining algorithms out there, such as sequential pattern mining, or the apriori algorithm. I would like to know if the fol