Example about pop up with table view in front of maps

Any help would be appreciated.

NOTE: I have never personally done this, but here's my theory:

The UISearchBar is a nifty tool in that you can hook a delegate up to it to control its actions. Below is a screenshot of the documentation which can be found here: link. 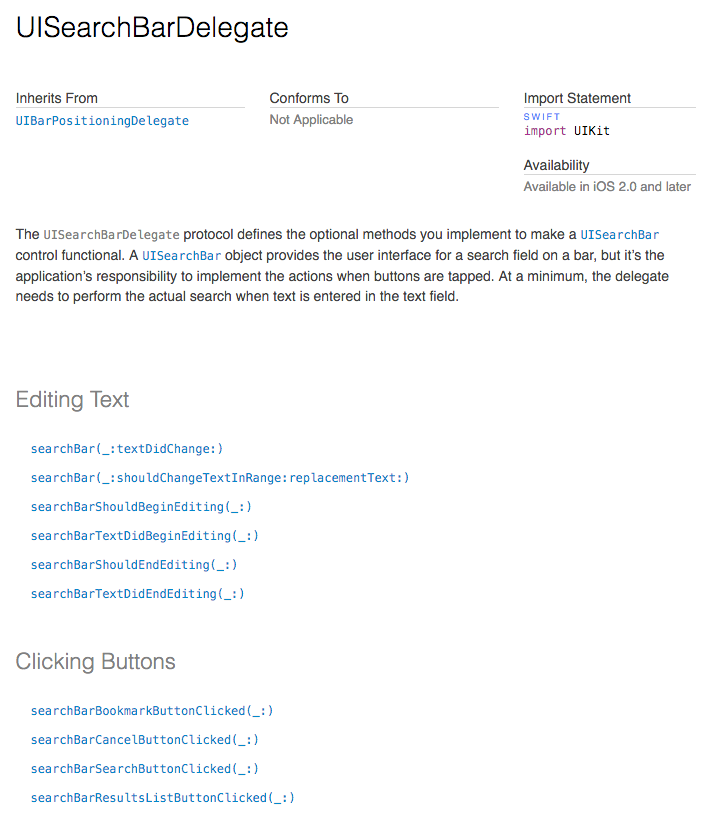 So, what I would do is to set the UISearchBar's to whatever it's surrounding class is. Then, implement your delegate methods so that when any of those methods shown above in the picture are called, the surrounding class will segue to a UIPopoverPresentationController, which in turn will have a UITableView within it. (The popover will literally "pop over" the rest of the screen.)

You will have to make sure that the class you have set as the delegate implements the UISearchBarDelegate protocol. It will look something like this:

After that, all the data configuration is up to you. Again, this is all in theory as I haven't actually implemented this myself. If I got anything wrong, please tell me.

EDIT: To respond to Dan L's comment on the initial question, it is actually is possible to have a popover present without going modal on an iPhone (or any compact screen). You have to set the presenting class as the delegate of the UIPopoverPresentationController an then implement a delegate method like this:

All the code is doing is preventing the popover from going modal ever.

END_OF_DOCUMENT_TOKEN_TO_BE_REPLACED

I wanna display a name list and a button under the list, but not sure how should i do it. Is it correct to create a blank View Controller, then drag a table view with table view cell and a button to it? The button will navigate to the add names funct

I'm writing an iOS app using Xamarin and am having a problem with a table view and search bar - when the search bar has been clicked and text entered, the search results view controller doesn't work properly - the cells, when scrolled, intersect the

I have custom UIView and UISearchBar that are placed as subviews on view controller view. In some case I need hide search bar view and then I want to resize my custom view. So let's say that search bar has 44 pt of height. If it's visible at the top

How to load only the table view after the search?

I am looking to create a view controller that has a way for a user to search for devices and then after they click the search button, I want the table view below to be populated. The problem is the tableview is loading right as the view controller is

how to change space with & ldquo; - & quot; in the search bar

How do I use the custom view class of the cell with the search bar?

I am using search bar and display controller with my view controller. Everything is working fine when i use default UITableViewCell. But when i use custom cell with controller . It doesn't display text on dragged label. This code is working correct-

How to make the search bar do not disappear when scrolling in the table view?

I want to make my search bar stop scrolling along with table view. I tried to add search controller into viewForHeaderInSection and it failed.Also I want to try to show original content while search bar active. So I try to do it in viewDidLoad but I

Viewing the search bar only when the user stops the table

I am new to code and I want to make an Search function in my Custom TableViewController. I get an error (Thread 1: signal SIGABRT) when I type (in the search bar) in a letter which correspond to a letter in an list of names (var namen*) I made. When

I have implemented a simple Table View Controller with a Search Display Controller dragged out via Interface Builder. I then enabled refreshing so that a Refresh Control is visible when the user pulls down to refresh. The problem is, the spinner is v

How can i keep the uiSearch bar i created in Xcode 4.3.3 fixed on top while scrolling the table view? Any thoughts?EDITED: If u have used the Interface builder to add the search bar, make sure that it is not added as the subview of the tableview (thi

I have a table with 4 labels which works fine. When I use the search bar, which also works fine, the table displays only two labels: - (void)viewDidLoad { [super viewDidLoad]; NSString *filePath = [[NSBundle mainBundle] pathForResource:@"airports&quo