I'm trying to query images from Parse and I continue to run into fatal error: unexpectedly found nil while unwrapping optional value. I'm not sure if this has to do with the recent update to Swift and Xcode, so maybe it's on the Parse end or it could certainly be user error.

The only things getDataInBackGroundWithBlock will accept are NSData? and NSError? as optionals. If I try unwrapping them or using other types it won't compile.

The PFQuery returns data as expected. It's only when trying to switch from PFFile to NSData in the getDataInBackGroundWithBlock call that the issue comes up.

The framework is hooked up and running. I've tested it quite a bit.

Here is the call stack: 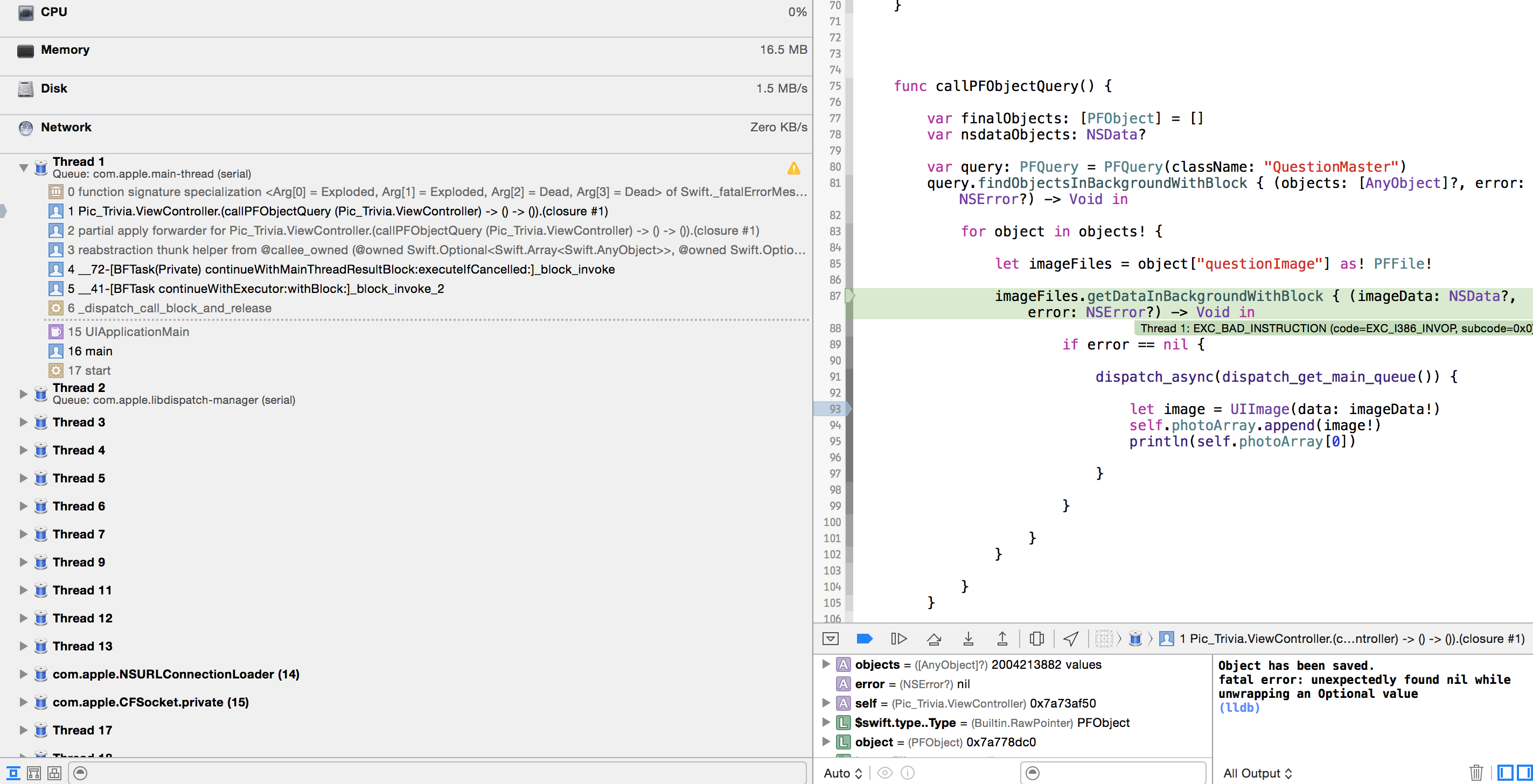 I've been working on this for over 12 hours straight now. I have looked all over the place and have tried many different things. I don't know anyone who works with Swift or Xcode, your help would go miles and miles.

Here are other threads I have tried to no avail, one is my own:

Unresolvable error with Parse "Get Data In Background With Block"

Parse getDataInBackgroundWithBlock not fetching in order

https://www.parse.com/docs/ios_guide#files/iOS (their example was my starting point today)

Update, November 12, 2015 - Swift 1.2: It's been quite a few months since I've posted this and since it has over 1k views and an answer with no upvotes I felt it best to go back over it and make sure what I selected was indeed correct. I haven't gone through and tested it again but having become very, very familiar(6-8k lines) with the Parse SDK and Swift I feel comfortable with the answer I provided. Uttam Sinha was very close but unwrapping instead of optionals on completion handler in getDataInBackgroundWithBlock won't work. They must be optionals and then unwrapped in the block. Ingouackaz missed the for-loop entirely, but his getDataInBackgroundWithBlock call is correct.

My first attempt was sloppy at best, I was probably frustrated. For those of you that are just beginning, the query right before the data query will complete with an array of PFObject's. Therefore you need to loop through that array, calling getDataInBackgroundWithBlock on each item.

Instead of object["questionImage"] I would probably go with object.valueForKey("questionImage") just to make it more explicit. I would also store the key string "questionImage" as a constant in a file of keys so there would be no need to worry about typos.

I'm not sure about PDF files and Parse. I haven't attempted since that situation. But now I am curious because that would once again make my job easier if possible. I will update once I try again.

This should work with Swift 1.2

END_OF_DOCUMENT_TOKEN_TO_BE_REPLACED

Obj-c and swift mixing: fatal error: use of the uninitialized initializer 'init (target: action :)' for the class

my code contains both objective-c and swift classes and so far, everything worked pretty well. however, i added a custom gesture recognizer that inherits from UIGestureRecognizer. My code compiles but when I try to run it I get the following error: f

StyleCop in the MSBuild script. How to make the output file only and no warnings or errors during construction

I am using StyleCop 4.4.0 RTW. I have installed it, copied the contents to a version controlled directory and I've added it to each of my project files by simply adding this line to each .csproj-file: <Import Project="..\Library\StyleCop\v4.4\Micr

Using SQLCMD in a batch file, how do I parse the response and check for an error?

I'm using SQLCMD to get the count of rows in a table, but I also want to be aware if the query hits an error. The sqlcmd I'm using looks like this: sqlcmd -S %server% -U %user% -P %pass% -b -Q "select count(*) from %table%" If it works, it will

Parse File Query does not work

I am attempting to get a file from Parse through a query. Parse is very vague on how to get files from the cloud, but I have managed to create a basic query to attempt to get a file ParseQuery query = ParseUser.getQuery(); query.getInBackground(objec

vb script to parse file names and do csv

Tap the screen for sound (array of sound files), xcode and swift

CURRENTLY - I am in the midst of building a flashcard app. The app displays an array of flash cards which the user can swipe left and right through(code below)As you can see there are 11 different image arrays (each containing a specific group of wor

What is the best way to reload a Fusebox application without finding a parsed file or directory? Errors?

I have a site using CF8 and Fusebox 5. Anytime I need to add a new feature to the site, I usually have to add a new fuse to circuit.xml.cfm for either the controller, model, or view, or all. To enable these new features/pages, I go to the following u

Linq to SQL and SQL Server Compact Error: An error occurred while parsing the query. & Rdquo;

I created a SQL server compact database (MyDatabase.sdf), and populated it with some data. I then ran SQLMetal.exe and generated a linq to sql class (MyDatabase.mdf) Now I'm trying to select all records from a table with a relatively straightforward

How to work with custom user columns in Parse.com and swift

I am using parse.com to create my swift app backend. I want to add columns to my user and then refer to the current user's new columns/fields throughout my code. What is the best way to do this? When I create my user in my swift code I add the column

On this page: http://www.sublimetext.com/docs/key-bindings it says that the sublime-keymap files are XML files, and can be configured with that syntax. However, opening up the Default (OSX).sublime-keymap file, I see only the following: [ ] Which sug

Azure - Do not redirect to the default page and display & ldquo; Failed to load file or assembly 'DotNetOpenAuth.Core' & rdquo; Error

I have been working with a Project which is split into the following: (1) Client Application (HTML5, CSS3, JS / AngularJS) and (2) WebAPI. It works fine locally, when I run the application, however, when I deployed the application to Azure and I atte

Psql - Write a query and output the query to a file