I understand the MVC pattern, but when it comes down to the model:

I could see a benefit to dividing the business logic from the repository ( data fetchers ). Something like:

Would the business logic go into the User class like:

Does anyone have a decent example. It's not as easy as 1 2 3 to find such an explicit example for me.

Does the above code seem okay? Should the Repository extend the User or should it be a separate class.. or should all of this stuff just go in the User class itself?

EDIT::---- Clarification of how I understand this now 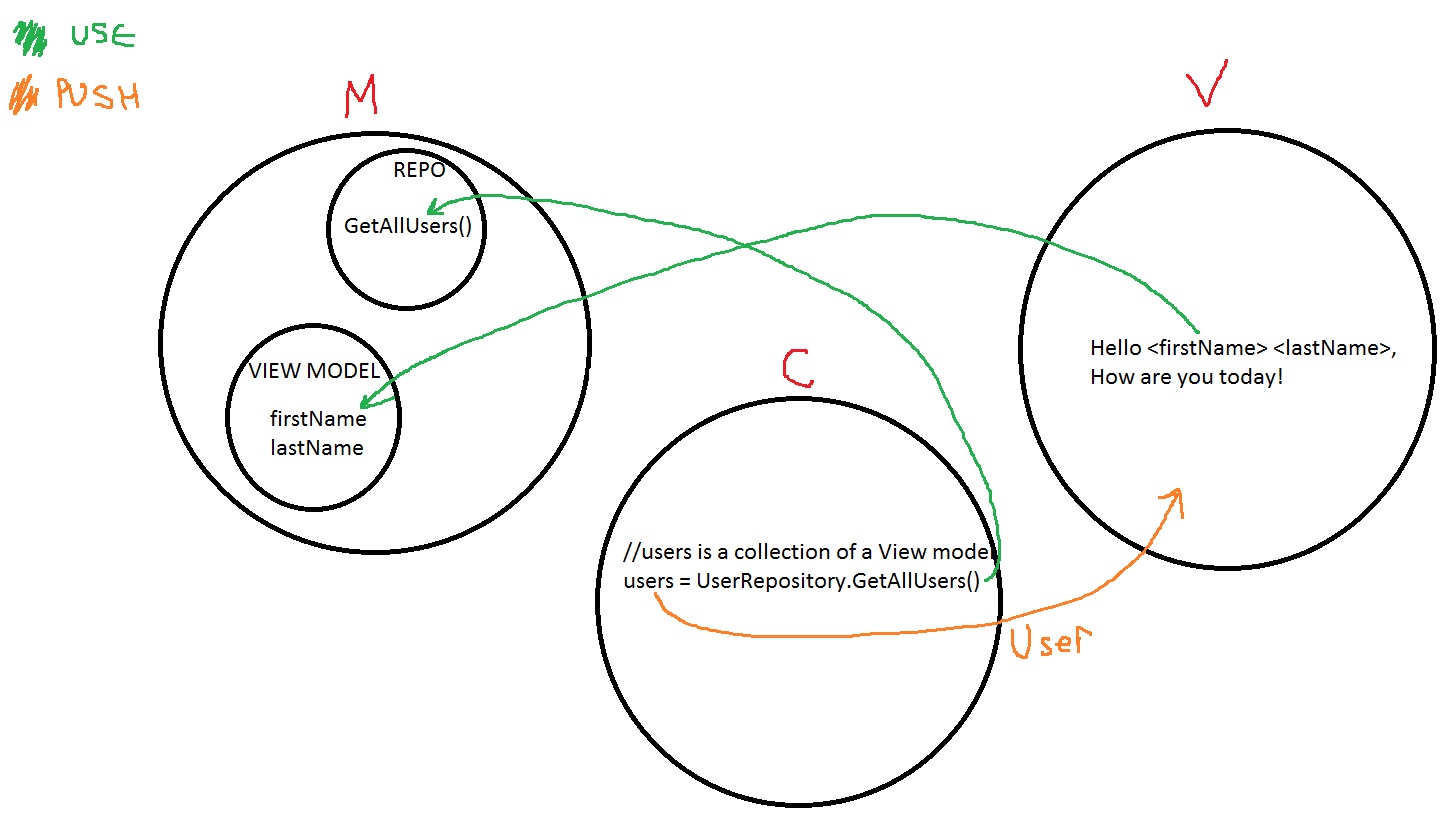 There are a few options in your situation. They are described in, for example, such book as "Patterns of Enterprise Application Architecture" by Martin Fowler. So it depends on the architecture pattern that you are going to choose.

When you were trying to find a solution you actually make smth like domain model pattern (User class for related business logic and separate UserRepository class for data access).

You can also merge these responsibilities in one class User (both business logic and data access) and so you will come to Active Record pattern.

However each pattern has its own pros and cons, I think that it definitely would be better to use domain model as it leads to OOP and right separation of concerns.

END_OF_DOCUMENT_TOKEN_TO_BE_REPLACED

Where is the business logic in MVC?

I am a beginner to the ASP.Net MVC. After reading many tutorials and digesting its concepts, I have yet to see an approach that clearly demonstrates where does the business logic go. My app will have a lot of use of jQuery AJAX usage (which will be c

When a long-running process is being executed, it is a good practice to provide feedback to the user, for example, updating a progress bar. Some FAQs for GUI libraries suggest something like this: function long_running_progress() do_some_work() updat

In MVP (Passive View), can the business logic also change the viewing interface or is it the presenter who can?

Creates a & ldquo; Dummy record & rdquo; Force the database to obey the business logic, a good idea or a beast?

In some projects I see that a dummy record is needed to create in Db in order to keep the business logic go on without breaking the Db constraints. So far I have seen its usage in 2 ways: By adding a field like IsDummy By adding a field something cal

Our application has very large data and we want to perform our business logic (aggregations) in the Database Layer (Stored Procedures). Liferay prefers to have business logic in Business Layer (having mutli-layered Architecture). What is the impact i

Should the business logic layer implement the authorization & amp; authentication?

I have a business logic layer (the "repository") which is exposed as a set of .NET interfaces backed by swappable concrete implementations. Originally I had this business layer implement authentication and authorization (authn/authz), meaning I

Good idiomatic way of refactoring the business logic of the controllers

I am new to Scala and Play; and I wrote a "do all" controller that contains both business and presentation logic. I want to refactor the business logic out of the controller. Here's what my Scala/Play looks like. What is a good/idiomatic way to

Does the business logic belong to the service layer?

Is there a way that a hacker or someone who wants to copy my software logic, can reverse engineer the business logic that I have in a webservice? Is there a way to protect such information? My development platform in .net asp.net and C#A user of the

We maintain a system that has over a million lines of COBOL code. Does someone have suggestions about how to migrate to a GUI (probably Windows based) without losing all the business logic we have written in COBOL? And yes, some of the business logic

the design of a badge system, where to launch the business logic? In the code or stored procedures? or both?

If you were to build a badge system similiar to how SO does it, would you put the logic/business layer in the database directly (via stored procedure, scheduled sql jobs) or put it in the server side? From what I can think of, you have to: list badge

Interaction between the business logic layer and the database access layer

I am currently implementing a system and I have a question regarding the interaction between different elements in the system with the class that interacts directly with the database (the one opening and closing connections, executing sql queries, et

Is this considered bad practice? Essentially, based on the enum I want to call a specific method in an interface. Each enum will have its own interface implementation (WalkImpl,RunImpl,JogIMpl, etc....) all based off of the ActivityService interface.

MVC: Is there a definitive answer to where the business logic belongs?

I'm currently trying to refactor a C# MVC application in spite of having limited experience of the pattern. Reading around the subject, I seem to constantly blunder in to dimetric opposite opinions on best practice. My biggest problem is that there's