I am attempting to create a model that will allow me to capture the owners, users & assets in a given organization. I seem to have hit a stumbling block as I am unable to answer the questions below as well as uncertain whether I have modelled it correctly. 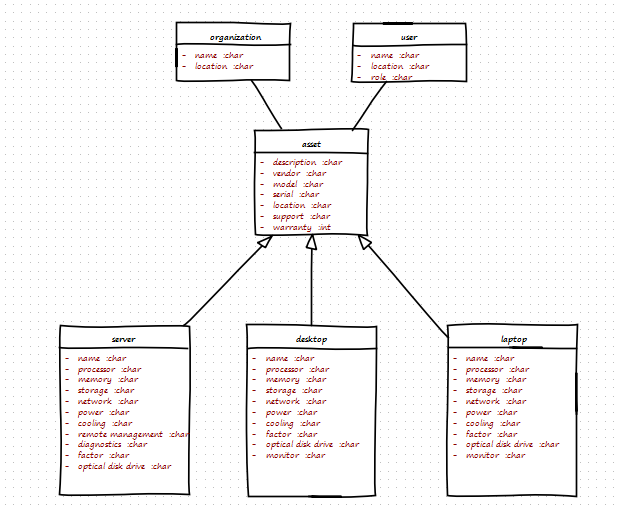 Further to the answers I have updated my model. Not sure if it is going down the right path. 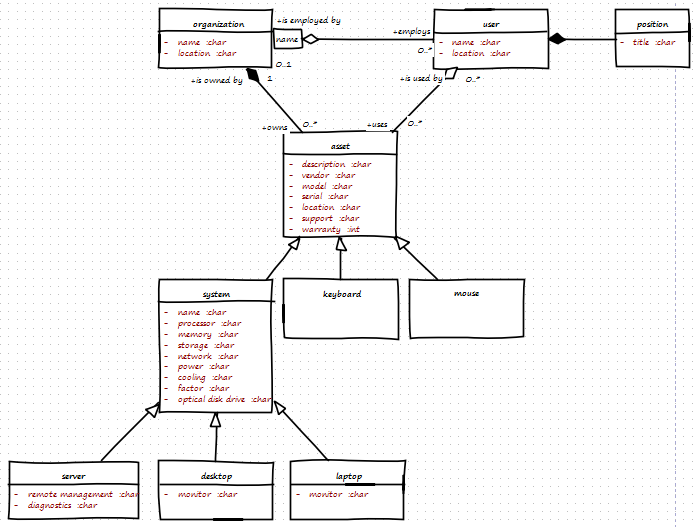 Re. recording info on ownership etc. here's an example: 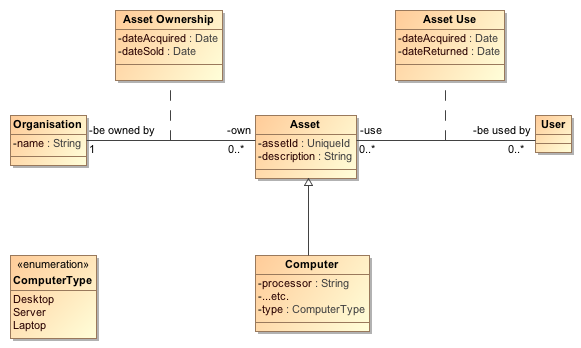 The key thing is that date acquired/sold etc. are attributes of the relationship between an Asset and an Organisation/User. They aren't attributes of the participating classes. In the example, Asset Use allows for many concurrent users whereas Asset Ownership only allows 1 owner at any given point. That's controlled by the multiplicity.

there is a requirement to display the owner as well as users. How would I show this seeing that the asset is not a subclass or subtype of the owner or user class?

Your display page would pull information from the necessary classes, following the relationship. A page isn't limited to showing info from a single class at a time.

OK: then you could have different datatypes for the two names. Perhaps a simple String for Organisation and a specific FQDN for Asset. But remember: that means all Assets must be named using an FQDN. If only Computers are named with FQDN then put the name attribute on Computer, not Asset. As an aside: it's pretty common for organisations to have a naming scheme for assets that's independent of the type of asset. The only requirement is that it's unique. I've shown this in diag above for example. hth.

How do I express ownership [..] for a given asset?

Presumably that's what the Organisation - Asset Association covers? If so, what's the multiplicity? Presumably:

How do I express user for a given asset?

Similar questions to above. Can many users use the same asset? Concurrently or sequentially? Do you need to record start/end dates for asset use?

How do I express the [..] server object has a vendor value of IBM

You have this modelled with the Asset.vendor attribute - which may be sufficient. However: do you need to capture any details for Vendors? e.g. contact info, address, support contracts, etc. If so you'll likely need to split out a separate Vendor class.

All 3 sub-classes have the same attributes. That smells bad - it suggests they aren't really different. Could you use one class (Asset) that captures all attributes - and has an extra "assetType" (or similar) with legal values "Server", "Destop", "Laptop"? However: do you need to track assets that aren't computers of some type? If so a single Asset class isn't flexible enough.

How do I assess behavioural constraints e.g. what happens if a user leaves an organization or an asset is damaged?

Depends on your business requirement. What needs to happen if a user leaves? Should the asset simply have no Users? In which case the relationship needs to be optional (0..*).

What does it mean for an asset to be damaged? Do you need to record the damages? If so you need another class.

Where do I capture this information if not in the model?

Generally I'd recommend you put some further thought into the naming & multiplicity of the associations. Doing so will undoubtedly raise questions about the requirements and/or domain constraints. That'll help you get a model that stands a much better chance of meeting the requirements.

END_OF_DOCUMENT_TOKEN_TO_BE_REPLACED

Is there a better way to consume multiple models than with ViewModels in ASP.NET MVC?

I'm new working with ASP.NET MVC 2 and one of the examples I'm following is the official ASP.NET MVC Music Store on codeplex. In the example project they have this scenario: There are three models: Albums , Artists, Genres. What is making me doubt is

Failure to deduce model from model (with inheritance in-between), is there a better way?

Is there a better way to update a DrawingVisual in a VisualCollection host in WPF with the MVVM template?

I am working on a project in WPF that updates the view up to 30 times a second. I'm employing the MVVM pattern to the best of my knowledge and am fairly happy with the results so far. However I'm wondering if there is not a more efficient way to upda

Is there a better way to fill the form input values ​​in the search form above?

Searching MySQL using many "similar" operators: is there a better way?

I have a page that gets all rows from a table in a database, then displays the rows in an HTML table. That works great, but now I want to implement a 'search' feature. There is a searchbox, and search-terms are separated by a space. I am going to mak

Conditional union in LINQ (or is there a better way than the UNIONs)?

I have the following object model public class CityData { public string CityName { get; set; } public int IncidentsReported { get; set; } } I have a web service method (that I cannot alter the code for) that gives me data for all the cities my compan

ReactiveCocoa, is there a better way to RAC first and refresh it later

Here's the situation I've a ViewModel (ok, follow the MVVM architecture), which has an array property, called "specialtySegments", and a flag property called "generic", I wanna when the generic value is changed, update the specialtySeg

Is there a better way to reset the grouping to Unity?

I'm programming in C# on Unity. When ever I need to reset a variable in a certain interval, I would tend to declare a lot of variables and use the Update() function to do what I want. For example, here is my code for resetting a skill's cooldown (Sho

Is there a better way to delete a last subview of the view?

To remove last subview from a view, I use [[[self.view subviews] lastObject] removeFromSuperview]; I'd use removeLastObject, but can't as subviews is readonly immutable array. So I need to: access all subviews get last object call method on it to rem

Is there a better way to formulate this update of the entity 4 framework?

Is there a better way to transpose a 2D PHP array?

According to the PHP Manual, calling array_map with a NULL callback causes it to perform a "zip" function, creating an array of arrays of parallel elements from the given arrays. For example: array_map(NULL,array(1,2,3),array('a','b','c')); yiel

Rails / Ruby 1.9: Is there a better way to put Unicode in source files than paste the encoding code at the top of each file

I just upgraded to Rails 3 and Ruby 1.9. All of my source files that used Unicode inside of them (such as emdashes) caused problems until I found out that you now need to include the following magic comment on top of each source file: # encoding: utf

Is there a better way to get the public & ldquo; Properties & rdquo; Of a Ruby object?

Is there a better way to get the public "properties" of a Ruby object? def props self.public_methods.grep(/.=$/) - ["==","==="] end Your regular expression is incomplete: it matches methods that start in any character, rather