I've got an interesting challenge with SSIS. Using a for-each file enumerator, I need to pick the subfolder which has been most recently created, and then iterate through each of the files.

Perhaps an example would explain better. The folders look something like this:

How could you get a for each file enumerator to pick the most recent folder? This could either be by looking at the creation date, or comparing the file names.

I'm guessing it would be done with an expression in the enumerator, just can't work out how! Couldn't find anything on the net either.

Here is one possible option that you can achieve this with the help of Script Task. Following example shows how this can be done. The example was created in SSIS 2008 R2. 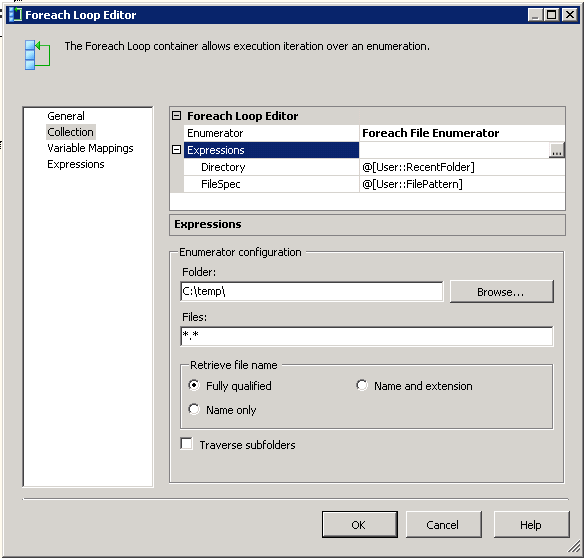 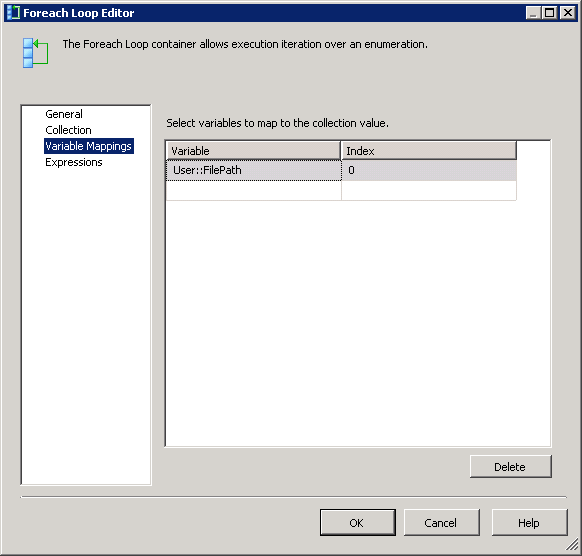 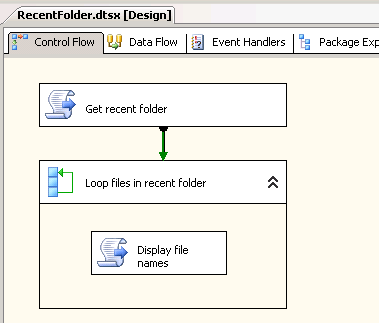 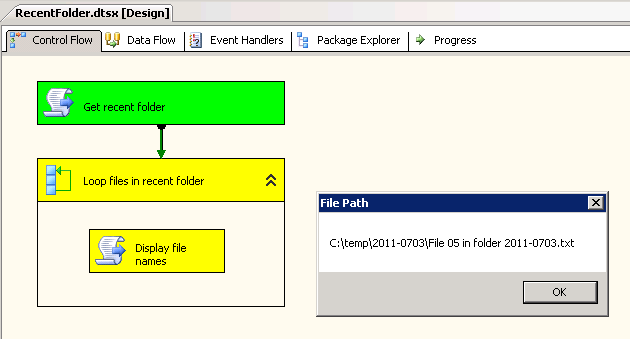 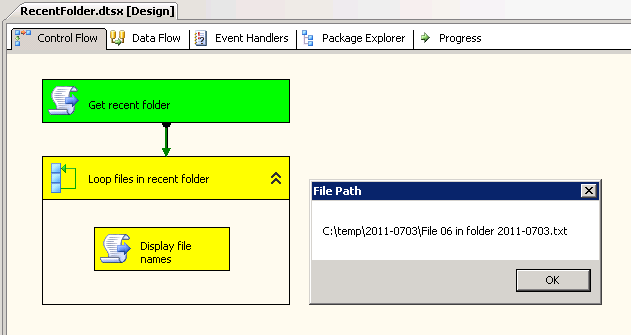 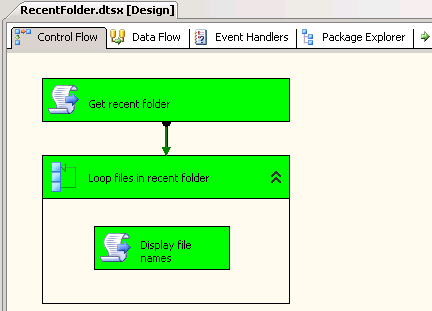 END_OF_DOCUMENT_TOKEN_TO_BE_REPLACED

How to get the most recently created subdirectory using linq?

I am very new to Linq. But I am trying to write a function to get the most recent created subdirectory by using Directory.GetDirectories(rootPath).Where(...). Is it possible and how to I continue? var info = new DirectoryInfo(rootPath); var latestDir

How to handle null values ​​returned by a stored procedure in the SSIS package?

I am a newbie to ssis and am having issues with the loading the results of a stored procedure that includes NULL values into a table with ssis. What I have is follows: Step 1 Execute Stored Procedure on Database1 will return a Full Result Set and put

How to check the results of the work of the SSIS package after completing its execution?

I have an SSIS package which imports the data into the SQL Server 2008 database. I have set up the schedule job in the SQL Server Agent to run that package. When I check the history, I could only see whether the job ran successfully or not. I could n

How to Configure the Configuration in a Nested Foreach Loop Container

The task is to load each sheet of multiple files (in the same folder)to the same sql server table, all the sheets have same formatting, can be loaded to the same sql table. I am using visual studio data tool 2010. I know how to set looping file using

How to include the foreach loop containing both HTML & PHP code in the body of PHPmailer?

I just built a shopping cart in PHP/SQL and when the client places an order I want to send him an email with his order info. The issues I am having is how to include the product list within the email as a table. I tried to use a foreach loop containi

I apologize for posting such a seemingly simple question. I know there are many similar questions already posted (and I have looked at many of these before posting my question), but I struggle to apply the answers to my situation. I am relatively new

We have a SSIS job called ExportData and it accepts the 'ExportType' Parameter. The ExportType parameter can be 'schedule' or 'unschedule'. I created the Variable called '@ExportType' and created the SSIS Configuration and expose the variable in the

I am invoking a Storedprocedure from SSIS Package. This storedprocedure has three input parameters like Start Date, End Date and a String Variable. We are calling the SSIS Package from .Net Application. So, we have to pass paramters from C# Code to S

I have made a SSIS package to create an XML file, which works fine in Visual Studio, but when I try to run in cmd prompt using dtexec /f "C:\OakeyCreek.dtsx" it throws an error SSIS Package "TestOakey" failed with exit code: 1 In the p

I've done a migration from SQL 2008 to SQL 2014. Unfortunately, one of the SSIS package which takes only 6 hours to run on 2008 is now taking 8 hours on 2014. Can somebody told me why this is happening and how can I solve this problem? Is it somethin

SQL Agent Run the SSIS package as an administrator

I'm trying to run a SQL Agent Job with a step that is a SSIS File, and I need this step to be run as administrator. My Package uses a Script task to download a file, as a Browser i Use WATIN. I'm using a thread to start this browser because this brow

I have a ForEach Loop Container that is supposed to iterate through the records in an Ado Enumerator. The Enumberation mode = Rows in the first table. I built a Script Task to write a MessageBox for each iteration. It only shows the message for the 1

What system memory will be used by the ssis package?