I'm doing a small research on design patterns in various platforms and I have prior experience in programming with Java.

While reading these posts: MVC pattern on Android and MVC architecture in Android,
I had an interesting question in mind: Why Java swing MVC can not be compared with Android development pattern? or Why we can't say that Android follows MVC? (in the context of overall "look and feel").

In one answer, someone clarified MVC as:

OK. well, now what I understand is:

putting all these examples together in an image; in swing MVC we have: 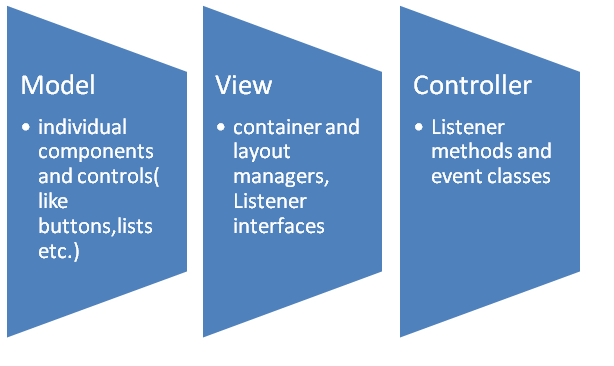 putting all together in an image; in Android we have: 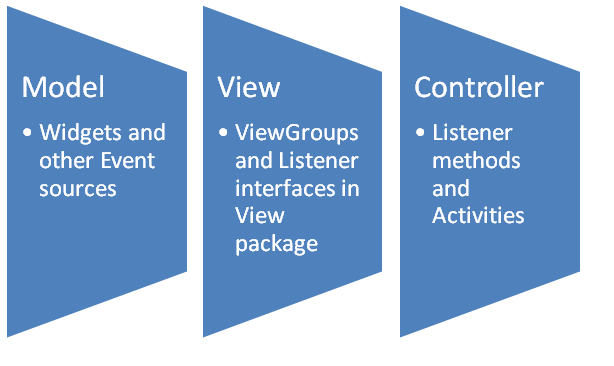 As per above comparison, I consider following similarities:

Each Swing JComponent has ComponentUI that is responsible for displaying a component. While JComponent has a paint method, only user derived classes use it directly - "standard" implementations very often just call the paint method of the attached UI instead. This allows to plug-in various look and feel implementations very easily - a different look and feel just provides different ComponentUI's. Very clearly component is the "model" and the UI is the "view". And Android does not inherit this decoupling in very obvious way. For instance, its TextView seems just painting drawables when a similar JLabel has UI.

This is however not the only place where MVC approach is used, and for some other specific cases Android and Swing MVC are very similar. For instance, Android ListView has a model (ListAdapter) very much like Swing JList has ListModel. In both cases the model provides data while the component itself provides possibilities to display. The possible difference is that Swing has more components with such decoupled data and presentation. JTable and JTree have similar models when Android does not provide such components out of box. There is no tree at all, and TableLayout is a that is called GridLayout in Swing, not similar to JTable.

The general approach for invalidating and repainting is not much different and in both frameworks only dedicated master thread can touch components. Also, event listeners (probably other group of "controllers") are very similar in Java and Android, all differences between them could probably be called "subtle" only.

Containers and layout manages are also quite similar between Swing and Android, the main differences being that Swing has much more possible implementations of its LayoutManager to choose from than Androids ViewGroup (classes like DatePicker, while derived from ViewGroup, are not general purpose layout managers). Also, part of Android layout is encoded in XML while Swing is typically plain Java only. If layout managers are also kind of "controllers" responding to events like resizing or reorientation, this part is very similarly done. However I am not sure if layout managers are really "controllers" as they update more the view than the model.

In general, Swing seems more optimized for the large, complex GUI that shows up on a large screen when Android is better suited for small screens with just a few visible components, large enough to be operated with fingers without stylus.

END_OF_DOCUMENT_TOKEN_TO_BE_REPLACED

Can someone suggest a UI automation tool for a Java Swing application with Record and Playback and screen capture facilitiesIf you're looking for tools on the free side, check out Frankenstein - http://frankenstein.openqa.org/ Abbot and Costello - ht

Specifying the location of AndroidManifest.xml in a Java project compiled with sbt android-plugin

I'm trying to use sbt to compile an Android Project made in Java, which I just inherited and want to improve with Scala. The project is splited across several modules. I've created an sbt project with "g8 jberkel/android-app -b sbt-0_11", copied

How is a Java Swing application organized to achieve MVC architecture?See: A Swing Architecture Overview

I've got a dialog in a desktop Java Swing app. What I want is a classic Windows-style Progressive Disclosure dialog, where pressing a "More Options" button opens up a whole extra batch of options on the dialog. (Which can then be hidden again by

I'm following this MVC model: http://java.sun.com/developer/technicalArticles/javase/mvc/ In my model I have an "ArrayList shapes" field and I need the shapes in my view. Is the only way of getting my shapes by getting them in the modelPropertyC

I Have 1 single java app. ONly Containing 1 JMenu with 48 JMenuItem(s). Each JMenuItems i set the Icon with Animated GIF. I have no problem creating it. And I also have no problem when Running it. But the problem came, when I running it, and then vie

Java swing: Jtable with many templates and a custom rendering

I have a jtable in which i recolor rows depending on values from model, something like this: resultTable = new javax.swing.JTable(){ private Border outside = new MatteBorder(1, 0, 1, 0, Color.BLACK); private Border inside = new EmptyBorder(0, 1, 0, 1

How to surround Java Swing components with a border?

I'm trying to setup a thread that loops every 100ms with every iteration querying a table in a SQL database. Here is what I have in my public static void main class. How can I define the connection outside of the listener and only call the query in t

This is for a desktop GUI application. I need to store my Java classes and JUnit test classes in two separate folders. How do I go about doing this in Eclipse, rather what is the best approach to do this?Create two different projects for swings and t

First off I've been working with Java's Concurrency package quite a bit lately but I have found an issue that I am stuck on. I want to have and Application and the Application can have a SplashScreen with a status bar and the loading of other data. S

Keep the toolbar visible in ListView with the Android Studio template

Using Android Studio 2.1.1, and presupposing that the templates offered are best (or at least sufficient) practice, I wondered how and why the toolbar is not available/visible when I create a simple app from scratch, and how to have the Toolbar show

I am creating this application to communicate the servlet by sending the selected units, if there is any changes in unit master server sends those units in the form of map with null values. From the desktop i need to get data from the server for only